I can't call myself much of a painter-sketching person. But yes I can draw. I can draw from memory and sometimes I get it right.

The Cannes film festival had taken me and my art director to Europe. Syama , my wife did the art direction for the short film. The Short film corner was exciting but  Europe as a whole was a visually different 'dictionary'. 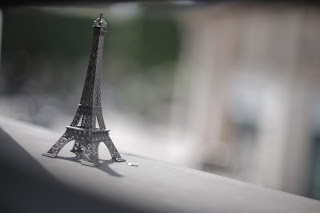 Syama and I had plans to visit Europe and Cannes was a good reason. I guess the real reason must be Paris. I had started scribbling in the notepad I got along with the stationary kit from Cannes.

I will post the photos taken in a future post but these are the scribbles made .  They are not finished products. But they help me remember. 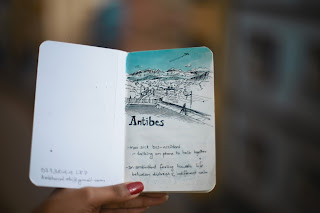 Antibes - in French Riveria - the railway station and Alps 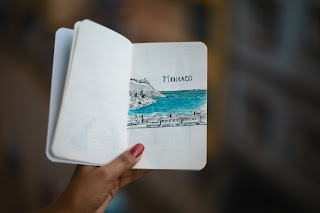 The blue beaches of Monaco and the trains 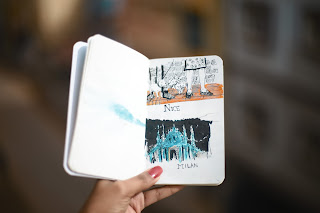 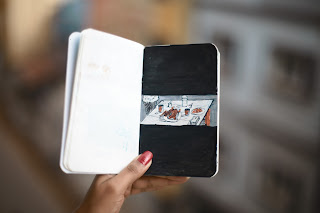 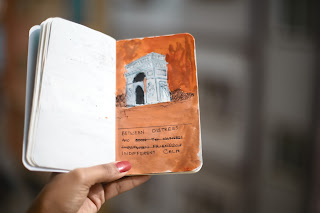 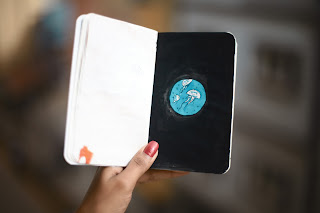 The jellyfish at the musée oceanographique de monaco 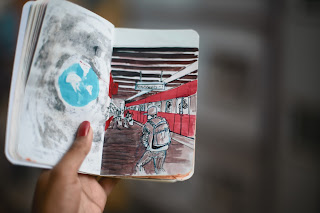 The metro at Milan 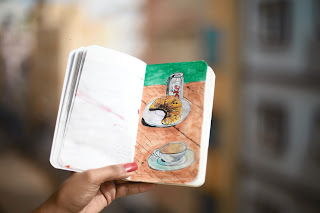 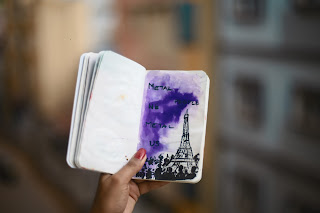 As we left Paris there were floods

Recovering  from an injury is always a tough especially when you are filmmaker.  I am sitting in front of my laptop after canceling a shoot since I couldn’t possibly travel and shoot. I passed on the shoot to a fellow filmmaker.  However I wanted to shoot something.

From the distant horizon came – the Ziman app film making competition with a 3 Lakh prize money. (2.4 after the tax is cut).  I got excited and  enrolled. However the last date was 20th March and I had just 6 more days to make it. I gave up the idea. The Ziman- app is not much of a help and its user experience and design is amateur.
Later I got a call from the Ziman people who had my number when I registered for the contest and asked me if  I am willing to participate. Somehow I felt positive and spoke to my friend Rakesh (who was also  editor in the last short film I did) if he can do the edit within two days.
All we had was 5 days. 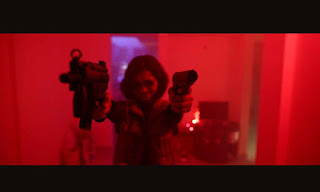 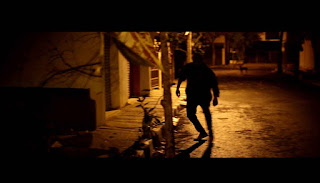 My wife who is always energetic was ready for the game but we didn’t have time to audition an actress and an actor. We decided to play both characters ourselves and shoot each other ( This was funny and we loved it) .
I rented a Rokinon 16 mm F 2 for the wide shots and two fluid drag head tripods. The video was shot on a Canon 6d with a Nikon 50mm Vintage lens, Carl Zeiss 35mm Barel on Standard Profile.
We shot in two nights and I  ignored my back injury. Syama (wife,artist ,costume- designer  and makeup) did her own costume and make up. We bought lights from a nearby store and arranged the lighting. However when we came back to shoot there was no power since it rained Cats and Dogs in Bengaluru.
Somehow we cleaned the mess and shot all night  till 5 am in the morning. By morning Rakesh sat on the edit and by the same evening we had a rough draft. We got voice over done from voice over artist Neelima and music was done by Ajmal Hasbullah in a single night. Sam Santosh did the sound design and mixing. We were ready with video by 19th when Ziman changed the date of submission to 31st of March. The entire team was heartbroken since we had stretched ourselves too far to achieve everything on time. 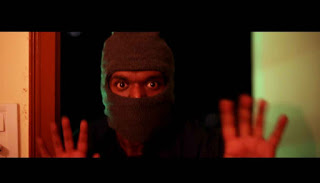 Rakesh started reworking on the edit and made it sharper and on 25th March we uploaded the video.
But Ziman  contest rules kept on changing. The first rule was the video shouldn’t be more than two minutes. A lot of videos which made to last round however were more than two minutes. Second rule was to explain the applications features. This was also not satisfied by most of the videos. 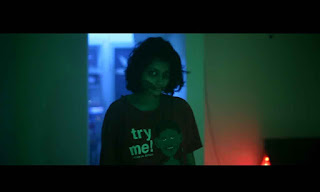 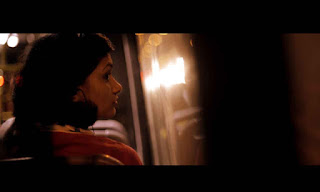 Suddenly Ziman call-representative called  up and said that the initial  screening was based on peoples vote through social media. There were around 58 videos and 30 videos with maximum number of votes would go to the jury round. This was an unscientific approach just to get as many contacts and email addresses and not a genuine filtering method.  Rakesh and Sam  got us votes from their circle. Saira (friend, designer and painter) got her friends to vote for it. Dheerej spread it within his circle and got as many votes as he could and my students in SHC voted for us from all their accounts (Most of them had multiple accounts). Syama  got a lot of votes for the video from her colleagues and friends.
The Jury for the next round was an eminent director Duo who selected ten films for a final round. We made it to the final round. However it is to be noted that final round was again left for voting. This was unscientific and manipulative. By then Syama  had lost her faith in the competition. However I was still hopeful.
The final nail on the coffin came when one of my acquaintance from an older shoot called me up and said that he can make me win and get all the votes but he needs a percentage cut from the win. I called up my producer (Rakhil  - friend –photographer – partner ) to tell about the deal but I had lost faith in the competition by now. Rakhil asked me if we should jeopardize all the hard   work we put into the video by resorting to such means and if the win is worth the means. Syama had already asked me this question. I decided to withdraw and not work on getting votes. We didn’t need the money anymore.
All together the video got 250 plus votes whereas the winning video got 3000 plus ( I still wonder why I have 2000+ friends on my social media network ). There were a lot of hues and cries from other participants who were leading in vote count initially, when they were suddenly overtaken by videos which had a few votes. Participants suspected manipulation by Ziman. Somebody even posted it on the fb page which disappeared miraculously 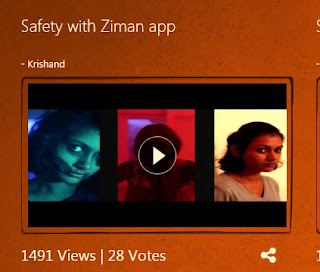 .  Anyway I was out of it. Rakesh who had dedicated a week of his time also gave up.

Lessons learnt –
Never participate in web  voting based completion.
The happiness of an art work is far greater than money.
Me and Syama worked together once again after ‘Sinners at the goddess abode” and me and Rakesh could get a common ground in terms of pacing the edit.

Thanks to all who voted…