The long holidays in March were not burdened by assignments and so I walked into Renoy’s room and asked him if we could take something short,a spec-spot commercial or a gimmick video. 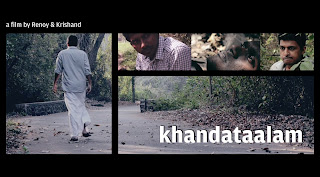 The next day we sat around discussing about the fight scene and Khandataalam took first shape.
A brain child of two story tellers whose styles intermixed to give a raw movie.Which evolved and may even be evolving as i scribble.


The entire movie and the fight scene were shot in the Powai lake area inside IIT campus in four days of 1—2 hour.s. No one else was included. This was an experiment to tingle and stretch our instincts.

before I found an itching plant
Very imaginative incidents like falling on an itching plant and stopping shoot and running back to hostel and renoy getting the character and stamping me could not be ignored. ( I have already ignored seeing leopard shit in the shooting location)


The movie is a 4 minute musical where the rhythm of the characters collide.


Chitali Achutha maarar helped us with the a chenda –idaika rhythm which form the soul of the movie.

getting into the shoes (slippers) of the character
Renoy took hold of the edit and the color grading and soon Khandataalam echoed and evolved into the latest form.

Excited to see a good response from everyone who saw it.  Thanks Abhinav and Abhilash for the support.
Posted by mr. green at 11:26 AM No comments: